"Now THAT'S how you shift a paradigm!!!" 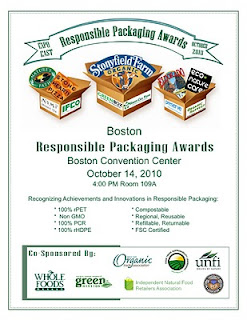 Yesterday, Ecovention CEO and GreenBox inventor William Walsh traveled to the gargantuan Boston Convention Center to accept honors for the GreenBox at the Responsible Packaging Awards.

Selected by the Responsible Packaging Project, the honorees at the Responsible Packaging Awards represent manufacturers and designers focused on ecologically responsible packaging as well as innovative design. ECOvention received an award for the GreenBox, recognized as much because it incorporates 100% post-consumer recycled content as for its ingenious and intuitive design that increases functionality for the consumer and drastically reduces the waste traditionally associated with pizza packaging.

The event was sponsored by a who's-who of giants in the eco-minded world: the Organic Trade Association, Food Trade Sustainability Leadership, the Independent Natural Food Retailers Association, the National Cooperative Grocers' Association...and not least of all Whole Foods Markets and their forward thinking Green Mission. The event and the award further cemented the relationship between the GreenBox and Whole Foods Markets, which is growing by the day.

To hear William Walsh tell it, the GreenBox was the belle of the ball. Not to take anything away from the other deserving honorees, but it seems that (as usual), Mr. Walsh’s intuitive design stole the show and effortlessly captured the attention of the industry representatives and the press in attendance. To give you some idea of the enthusiasm generated by Mr. Walsh’s demonstration of the GreenBox, one attendee (a very prominent individual in the industry) was heard to shout, “Now that’s how you shift a paradigm!!!” – re-emphasizing the idea that the GreenBox represents a veritable sea change in the approach to food packaging in the 21st Century.

Mr. Walsh tells me that immediately prior to the presentation of the “Oldest Intern Award” (for which I was widely considered a shoe-in), there was a commotion at the front of the room and the event came to an abrupt and premature conclusion. I believe the award was withheld for political reasons too complex to summarize here. Sales Director Ned Kensing attempted to console me by offering me a ride on his motorized scooter, which I declined on the grounds of safety as well as self-respect.

Someday, I believe that my efforts will be recognized. Until then, I will watch from the wings as the GreenBox continues to get all the attention.
Posted by The GreenBox from Ecovention, LLC at 3:45 PM