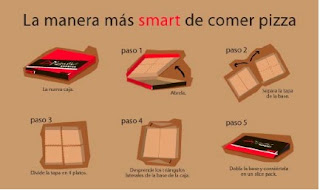 In conjunction with the SmartBox introduction, Pizza Hut Costa Rica has launched a campaign that not only includes print avertising and television and radio spots but also a social media campaign that includes a contest on Facebook.  The contest encourages customers to upload photos of themselves utilizing the new technology (check out a few of those shots above!), with the winner receiving a pizza an Coca Cola party with thirty friends.

The new SmartBox has already receive an enthusiastic response from customers, as evidenced by a spike in sales since the product's launch, according to a recent article in Prensa Libre, one of Central America's leading newspapers.
Posted by The GreenBox from Ecovention, LLC at 11:55 PM