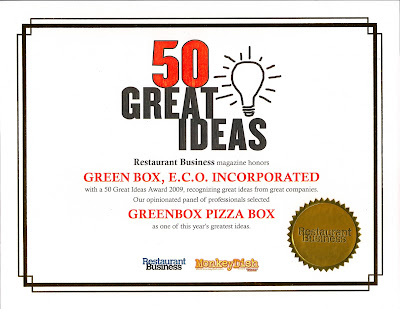 Penury and anonymity continue to be my lot in life. The GreenBox, on the other hand, is racking up industry accolades left and right.

The Wharton School of Business ("Top 25 Most Promising Start-Ups)...Columbia Business School ("Outrageous Business Competition")...The Green Business Competition...TIME Magazine ("Inventors and Their Inventions")...the list goes on and on. Publications and institutions all over the United States have been hailing the GreenBox as an innovation and a revelation ever since the product burst on to the scene...and the praise just keeps on comin'.

Today, we received a package here at the NYC offices from Restaurant Business Magazine, one of the most venerable periodicals in the industry. The package contained official recognition of the GreenBox as one of the 50 Great Ideas of 2009.

Shockingly, I was not mentioned in either the award itself or in the accompanying letter of congratulations. An oversight, I assume.

Besides, I get enough credit on a daily basis here at the office. Why, just the other day, Jen looked up from her numbers-crunching and said, "Hey Ned, does your brother still work here?" Keep in mind that I was sitting right behind her at the time, and had also brought her tea earlier that morning. Ned did not respond to her query, as he was out blowing upwards of $500 on his daily shopping-spree at G.N.C. (the man takes more supplements than mid-80s Hulk Hogan).

Still apparently not realizing that yours truly was sitting mere feet from her desk, Jen mused aloud, "I wonder how long we can keep milking that dweeb for all he's worth...which, granted, isn't much."

So you see, I don't need awards. Just a few kind words from colleagues who respect me and value my contributions...that's enough to keep me going.

So while it doesn't look like I'll be nominated for Intern of the Year (or even Intern of the Week) anytime soon, I'm proud to be working for a company that's captured the attention of the entire pizza industry.

We encourage you to check out the write-up in Restaurant Business Magazine here, and we thank the folks at RBM for this fine distinction.

Stay tuned to this blog as the GreenBox transitions from one of the Best Ideas of 2009 to the Household Name of 2010. As they say in Ned's favorite Broadway musical, The Heights...it won't be long now.

The GreenBox Intern
Posted by Sean Kensing at 12:26 PM