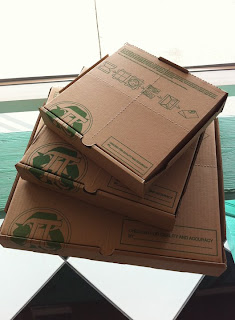 When's the last time you heard someone describe a pizza box as "sexy"? Unless you run with a very odd crowd, you've probably never heard that word applied to food packaging of any kind. But that's the only way to describe the GreenBox now being carried by the (decidedly sexy) Pi Pizzeria.

Take a gander at that box. Drink it in. Don't be surprised or disturbed if you start to feel...certain feelings. It's OK; we're all friends here. There's nothing wrong with being attracted to a pizza box - as long as it's the GreenBox, of course. (As for those hopelessly outdated standard pizza boxes, I wouldn't be caught dead with one of those - I have standards).

We gotta hand it to the folks at Pi Pizzeria; that GreenBox is just plain pretty. I wouldn't be surprised to see a group of St. Louis construction workers whistling and cat-calling as a Pi Pizzeria GreenBox breezes by them on the street. "Hey! Babe! Where ya goin'?? I just wanna talk to ya!"

Don't be embarassed; feel free to return again and again to check out that pic! And check out Pi Pizzera - the only pizza restaurant we've come across that has been personally touted by the President of the United States (also known as the Leader of the Free World). That's a heck of an endorsement...and that's a heck of a good-looking GreenBox.

Things are getting exciting, folks...
Posted by Sean Kensing at 10:15 PM