The GreenBox: On the Road Again!!! 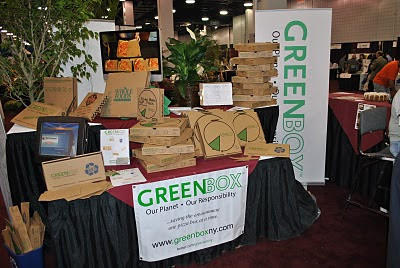 When the GreenBox is invited somewhere, the GreenBox doesn't go alone. The GreenBox can't drive, after all. That's where Sales Director Ned Kensing comes in (he can't drive either, in my personal opinion, but maybe that's just residual trauma from the past. You'd feel the same way if you had endured a childhood of hair-raising, near-death experiences in a car with him).

A tireless workhorse as always, Ned did not hesitate to accept the invitation and rise to the occasion.

Ned was up at dawn loading up the truck with GreenBox samples and display materials. He was on the road before the sun was up, and arrived at the Performance Food Group/Roma Foods event bright and early for pre-show pow-wows with the bigwigs.

According to Ned, the GreenBox was such a hit with the crowds that he was unable to step away for a meal or a bathroom break until about 4 pm. All things considered, Ned handled the situation well and was able to avoid any (noticeable) incidents of incontinence. I would have been happy to accompany Ned on the trip and lend a hand, but I'm still in intensive psychotherapy following my nervous breakdown at a previous trade show event. I'm not built for the limelight.

Imagine that, though - the GreenBox is a product so popular, a product that makes crowds so ravenous for samples and information that this lone superstar of sales could not even excuse himself to use the restroom, let alone eat lunch. (Incidentally, "lunch" for Ned usually consists of washing down a Cliff Bar with half a bottle of apple-cider vinegar. He swears it's great for you - I swear he's certifiable). Certifiable or not, by all accounts it was a fantastic success for the GreenBox and another triumph for Sales Director Ned Kensing.

And look at that pic! Incontrovertible photographic proof that the GreenBox is sweeping the nation! Represented at the show were the customized boxes from just a few of our wonderful customers - Pi Pizzeria, the New York Pizza Department, Ali Baba (a Canadian chain, about whom more will be written soon), and last but by no means least, Whole Foods! Not a bad roster - and it's growing by the minute.

Special thanks to PFG/Roma Foods and in particular to Roma's Peter Gallant.
Posted by The GreenBox from Ecovention, LLC at 2:50 PM