That was delicious. Now what am I supposed to do with this thing? 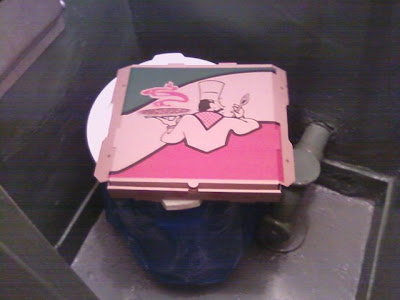 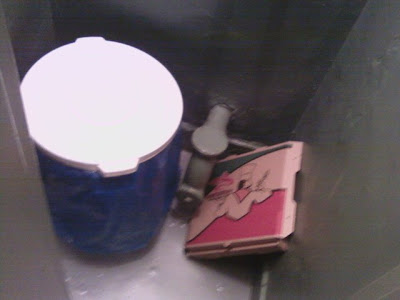 But last night I had an experience that drove home the undeniable appeal, nay, the absolute NECESSITY of the GreenBox as part of a less stressful, more responsible lifestyle. The following story is true (as the grainy, cinema-verite cell phone pictures will no doubt prove).

I arrived home around 9 pm and decided to get a pizza for dinner. I haven’t been eating much pizza in recent months, due to a mean case of body dysmorphia that has me convinced I’m getting chubby (six foot three, 135 lbs.). But I had a serious craving for some Brooklyn slices, and I figured it was about time I took a cold hard look at “the competition”, box-wise.

I strolled down to my neighborhood joint to place my order. I’d tell you the name of the restaurant but frankly, I don’t trust some of you people and I’d rather you didn’t know where I live. Let’s just say it’s that pizza place in Brooklyn, the one with the guy, next door to the thing.

I returned home with a small cheese pizza (6 slices), and proceeded to tear through four of them while watching Maury Povich clips on YouTube. Once I was full of pizza (and nostalgia for the days of quality television), I turned to the problem of storing the leftover slices and disposing of the box taking up precious counter space in my kitchen.

I had two slices left over. The first step was locating my supply of aluminum foil. Once I found it (behind the George Foreman grill which has not been used or even acknowledged since 2006), I clumsily wrapped the two slices in this wasteful, improvised packaging and turned to the box.

In the silence of my apartment, the box seemed to whisper, “Psst - Sean. Hey, Sean. What’re you gonna do about me? I’m a real pain in the ass”.

And indeed it was. I considered breaking the box down so it would fit in the recycling bin out in the hall. But with arms like mine, breaking down a non-perforated box is a bit of a tall order. My biceps can make short work of paper towels, tissue, or rice paper, but corrugated cardboard has a bit more backbone. I decided that tearing the box apart (without helpful perforations to reduce the strain on my forearms) would be too taxing for me. Moreover, I needed to conserve my strength because CEO William Walsh told me that the following morning would be the first edition of the Intern Pull-Up Challenge (winner gets to clean his bathroom). What to do, then?

There seemed to be no other choice than to simply take the box out in to the hall and leave it in the garbage area, still in one (annoyingly large) piece. This was essentially the opposite of the “pay it forward” mentality; I was really just passing along the headache to someone else (namely, my super).

All in all, I learned a lot from the experience, specifically that it’s time for the GreenBox to become the industry standard and bring real convenience back to pizza-eating. What’s the point of taking your pizza home if it has to travel in something that won’t fit in the recycling bin or in your fridge? It’s time for a change.

Too bad Will won’t give me any free samples.